The MEDports Forum 2022: the challenges of digitalization in the Mediterranean

The MEDports Forum 2022: THE CHALLENGES OF DIGITILIZATION IN THE MEDITERRANEAN, should be a place of gathering and exchange of opinions, ideas and best practices among the representatives of the international institutions, experts of maritime transport and port activities, and leading port members in order to assist Mediterranean ports in building a resilient, progressive, and vibrant maritime sector through the use of digitalization.
The Forum focuses on how digitalization is key in building a resilient and progressive region that may achieve green transition objectives, awareness of climate change, improve safety & security in port operations and provide a greater logistical efficiency in the maritime sector. The digitalization topic has been widely supported and encouraged by international institutions and by international trade actors across all the continents, this is why during the MEDports Forum 2022 various speakers from the International Association of Ports and Harbors, the World Bank, the International Maritime Organization, many professional associations, ESPO, BPO, FEPORTS, AGPAOC, IPCSA, international experts and various port authorities will all be participating in sessions dedicated to the state of the art of digitalization in the Mediterranean, its challenges and key success factors.
After the opening session with the representative of the President of the MEDPorts, Mr.Lionel Riviere and Vice-President of the MEDPorts Mr.Pino Musolino, whom is the CEO of the Port System Authority of the Central Northern Tyrrhenian Sea and the Forum sponsor, the Union for the Mediterranean represented by Francesc Carbonell, Head of the Transport Sector and the deputy mayor of Civitavecchia.
On the first day, a roundtable with the perspectives of international associations concerning digitalization roadmaps held to both understand it’s drivers, benefits, and the challenges. The international speakers were:
• Patrick Verhoeven, Managing Director of the International Association of Ports and Harbors, IAPH
• Isabelle Ryckbost, Secretary General of the European SeaPort Organisation, ESPO
• Hans Rook, Chairman of International Port Community System Association, PICSA
• Lamia Kerdjoudj, Secrertary General of the Federations of European Port Companies and Terminals, FEPORT
• Bogan Oldakowski, Secretary General of the Baltic Port Organization
• Jean-Marie Koffi, Secretary General of the Port Management Association of West and Central Africa
• Alberto Rossi, Secretary General of Assarmatori
In the afternoon two sessions will be held, the first regarding the digitalization experiences and practices in the ports with the following speakers:
• Alaa Morsy, Dean of the Port Training Institute,
• Fulvio Di Blasio, CEO of the North Adriatic Sea Port Authority
• Tommaso Spanevello, European Affairs Manager of the Haropa Port
• Hrvoje Kulusic, Assistant General Manager of the Dubrovnik Port Authority
• Sergio Prete, CEO of the Port Network of the Ionian Sea
The last session of the day will regard one of the most important topics: The institutional framework regarding digitalization, with our experts:
• Martin Humphreys, Lead Transport Economist from the World Bank
• Laura Castellani, Digital Transformation Director from the Italian Customs Agency
• Martina Fontanet, Technical Officer of the International Maritime Organization
• Orlando Reveco, Digital Product Manager of Escola Europea of Intermodal Transport
The Italian Minister of Infrastructure and Transport will be holding the opening speech of the second-day of the MEDPorts Forum, Mr. Enrico Giovannini. The mayor of Civitavecchia, Ernest Tedesco will be present as well.

La Vecchia fa due su due 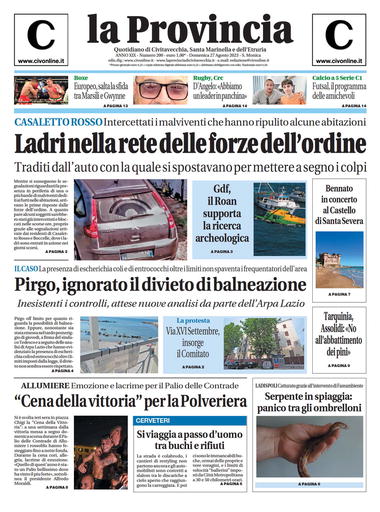